Baking security into the DevOps lifecycle – why and when

DevOps delivers a flexible framework that enables companies to deliver new innovations faster to market.  However, there are lingering questions about its impact on security.  With multiple functional teams collaborating on development, and so many moving parts in the process, security is often not incorporated into the process, rather it’s tacked on at the end – which ultimately negates many of the benefits of DevOps.

Yet the earlier that security is baked into a DevOps process the better and safer – both for the company developing the application, and the application’s users.  A SANS report into application security found that resolving defects in a live, production application is twice as expensive in terms of person-hours as fixing them during customer beta testing, and six times more costly than eliminating them during initial testing.

So let’s take a look at how, when and why security should be introduced and automated into DevOps.

Now, to make these processes as realistic as well as secure as possible, you would typically have firewalls in each of the three environments, segmenting between the clients, servers and the databases. This segmented structure is replicated in the test and production environments, like this 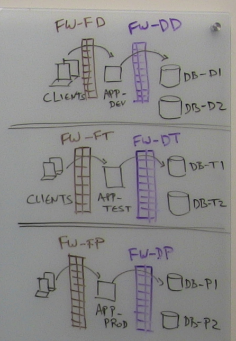 And here’s the catch – it’s not as simple as merely copying the rules between environments.  As we’ve already mentioned, while the firewall rule structures are the same in all three environments, the objects are not the same.  You have to map the objects in the development environment rules over to their counterpart objects in the test environment. And then repeat the process again when moving into production.

And this is where you need a security policy automation that supports the DevOps methodology. This solution needs to be able to automatically copy the firewall rules – and then make the necessary modifications to map rules to the new objects, when the rules are applied to each new environment in the DevOps lifecycle.  With the right automation solution, security can be baked into the DevOps process providing an easy and cost-effective way to introduce and maintain security right from the start.

See me explain this issue in person in my new whiteboard video:

How to stand out in information security

Leave Behind a Legacy: Escaping the Paradox of Infrastructure Upgrades for Your Data Center

Managing the switch – Making the move to Cisco Meraki

You are using an Adblocker – Good for you

However, your experience on the site may be impacted.

We don not ask your personal information to access any of our resources.

Here is how to disable your adblocker on Chrome, Safari, Firefox, Edge.

You can choose whether or not to allow intrusive ads on the page or not. These settings are on an individual site basis.

But, if you do want to get in touch with us, email questions@algosec.com - there is a human at the other!